In a brilliant stroke of marketing savvy, Champagne has managed to convince most of the wine drinking world that the region’s iconic, highly effervescent sparkling wine is the definitive drink of celebration. Frothy, overflowing and jetting into the air from bottles overcome with bubbles, Western media, from movies to music, literature and even visual arts, have reinforced an image for Champagne synonymous with success and jubilation. No surprise then, that New Year's Eve is the culmination of Champagne consumption.

Today, most wine lovers are aware that Champagne and sparkling wine are not one and the same. The rise of Prosecco, Italy’s hard-won stronghold of fruity and relatively affordable sparkling wine, has challenged Champagne’s dominance, as have numerous other wine styles which gained wider recognition over the past few decades. Pét Nat for natural wine drinkers, Cava as a Spanish alternative and even Franciacorta had a brief love affair with sommeliers in fine dining establishments. So many styles, and possibly so many changes for confusion. Don’t worry, we are here to help. Here is a quick snapshot of the wide world of sparkling wine at your fingertips.

At its most basic definition, sparkling wine is any wine which contains bubbles. This is achieved through dissolving carbon dioxide into the wine. The cheapest method is simply carbonation, that same process found in commercial sodas and fizzy soft drinks. Bubbling CO2 into the wine under pressure reliably forces it into solution, but it also rapidly dissipates and disappears the moment it is opened. To achieve better results, the CO2 is usually created as a result of fermentation in a sealed vessel of some kind, be it at volume in large tanks, or painstakingly within each bottle. Most wine textbooks will divide the world of sparkling wine in two; tank-fermented and bottle-fermented, to reflect this particular distinction.

There is also one other factor to consider in broad strokes - whether the CO2 was as a result of the primary fermentation (i.e. when the grape juice first turns into wine), or as a result of encouraging a second fermentation through the addition of more sugar and yeast to a finished wine. One easy rule of thumb for knowing what a sparkling wine might taste like involves knowing which of these methods was involved; primary fermentation will generally result in fruitier, more primary and fresh-tasting wine, whereas secondary fermentation tends to yield more vinous, complex and less overtly fruit-driven styles. Likewise, all other things being equal, a wine which undergoes this process in bottle will tend to have richer, more yeast-derived complexity than one which does it in tank, not to mention the inevitable variability which arises from the single-batch nature of bottle-fermentation. After all, it is entirely possible that no two bottles experienced exactly the same biochemical changes. When considering combinations of these factors, the influence of primary vs secondary fermentation is stronger than that of tank vs bottle — mainly because any sparkling wine which involves a secondary fermentation has to first turn into finished wine, taking it one step further away from grape juice. 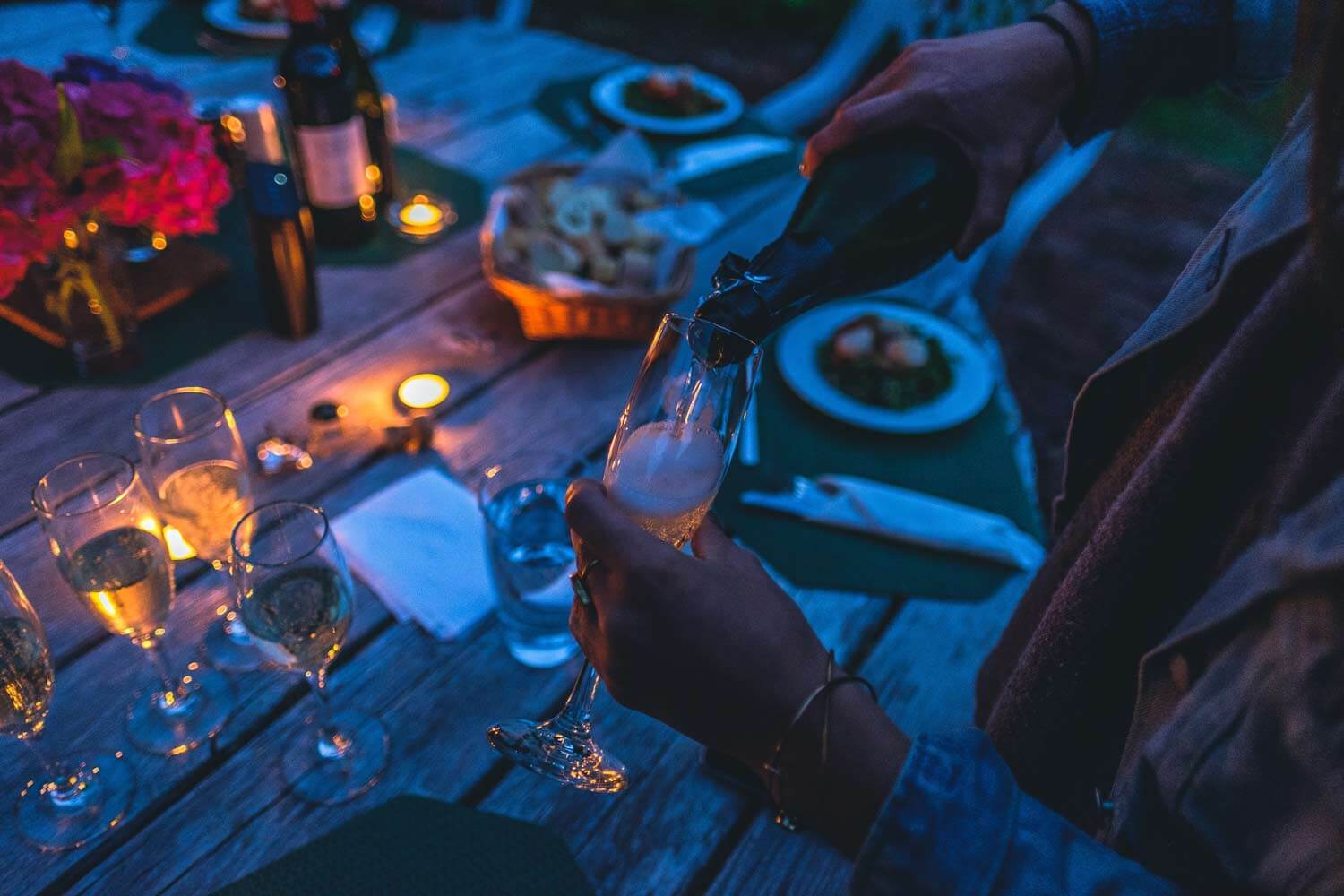 Let’s put this to practice. Moscato d’Asti is the classic sweet, low-alcohol, mildly sparkling wine of Piedmont, Italy. It is tank-fermented and the bubbles are derived from primary fermentation in a sealed tank, which is then stopped and bottled while most of the sugar is still unfermented (that’s why its alcohol is a low 5.5%!). Unsurprisingly, it tastes almost like grape juice, with lots of fruitiness (heightened by the sweetness) and little in the way of toasty, complex vinous character.

Next, let’s change one of those factors, say the fermentation vessel… so we have a bottle-fermented wine which gets its bubbles from a primary fermentation. This would make it a pét-nat (pétillant naturel) or méthode ancestrale wine. Though these two terms are not entirely interchangeable, their methods are similar enough that they often get used that way. Pét-nat usually refers to a wine which achieves this without much winemaking intervention. The ‘ancestrale’ part of méthode ancestrale refers to the fact that regions using this term are trying to distinguish themselves from the more modern practice of Champagne, which is called the méthode traditionnelle (yes, I know, it’s terrible nomenclature…. you have a choice of something traditional, or something ancestral). These wines do tend to retain a large portion of their primary fruitiness, but combine it with the complex Maillard reaction compounds derived from yeast in contact with sugar and wine for a longer time. Pét nats tend to reflect their grape varieties and origins quite well, as there is less additional aging involved and it is basically just a wine which finishes fermenting in the bottle. Therefore, if the wines from that area are generally more mineral, earthy or austere (like in the Loire or Chablis) their pét nats will taste that way also; and regions with varieties which are bright and fruity (like Germany, Austria or Mediterranean areas which grow the heady Muscat de Alexandria) will give you aromatic, perfumed Pét nat.

If we did the opposite, i.e. have a secondary fermentation for bubbles, but performed in tank rather than bottles, we arrive at Charmat-method or ‘Cuve Close’ sparkling wine, epitomized by the Prosecco wines of Italy. Prior to 2010, Prosecco used to be the name of the grape variety which we now call Glera, allowing Prosecco to be a protected term referring to the style of wine from a general area of Italy surrounding the hills of the Veneto where it reaches its apogée. These wines are generally another step up in effervescence than bottle-finished primary fermentations, since they have a mid-way step where they exist as finished wines before the second fermentation is induced.

Flipping the switch on both factors to full, we end at méthode traditionnelle, the technique utilized by Champagne, Cava, Franciacorta, Cremants from France and almost every serious sparkling wine producer in the New World from California to New Zealand to England. Here, the ‘base wine’ has to finish fermentation, usually to an acidic and dry state with relatively subtle flavors, before it gains most of its flavor during the extended aging on yeast lees during the secondary ferment in bottle. To gain these complex toasty, brioche flavors (derived from slow unheated Maillard reactions), they have to spend years enriching on the yeast lees, which break down over time to release flavor precursors. If you’re wondering what happens to all those yeast lees, that’s a good question. Clearly, unlike many pét nats, most sparkling wine is clear rather than cloudy or full of floating fine particles in suspension. This is because they are removed in the case of méthode traditionnelle wines through a process called disgorging; which in practice includes two steps, riddling and disgorging (if you see a nice, clear pét nat, it has probably also been disgorged). Riddling involves daily rotation of each bottle until all of the sediment is trapped in the neck of the bottle, and disgorging involves flash freezing that sediment/sludge in the neck so it can be ejected as a solid plug of ice from the bottle, allowing the remaining wine to be crystal clear. Then, they are topped back up with a bit of wine before a cork is inserted (prior to this corking stage, the bottles are stored with crown seals, which are basically those caps you see on beer bottles). This is also when most méthode traditionelle wines are given their ‘dosage’ of sugar to sweeten them up (hot tip, most bottles are labeled Brut which means it contains a dosage between 5 and 12 grams of sugar per liter). There is a cheaper way to do disgorging, which used in ‘transfer method’ wines (rather then méthode traditionnelle) — all the bottles are opened and emptied into a pressurized tank, where the sediment is allowed to settle to the bottom and the clear wine is then rebottled.

So there you have it — more sparkling wine making trivia than you will probably ever need, but if you’ve read this far, you probably didn’t have something more pressing to attend to anyway so hopefully it comes in useful during some pop quiz some time.

From us at Stompy, wishing you a Happy New Year!

Back To The Blog
×

You will lose all "The Drop" subscription features.